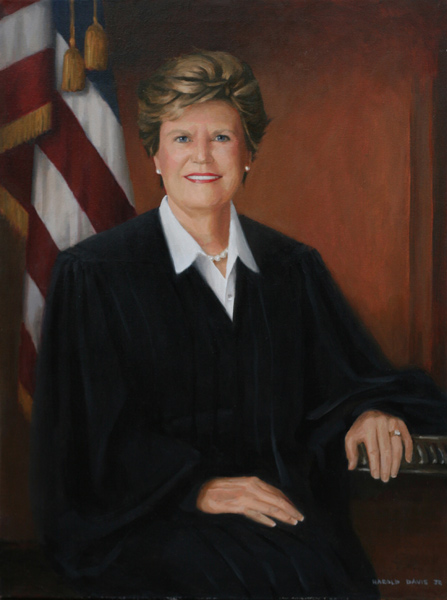 In a wonderful ceremony that truly captured her spirit and influence, the Eleventh Circuit yesterday honored the Honorable Susan H. Black at the presentation of her portrait to the Eleventh Circuit Historical Society. As Eleventh Circuit Chief Judge Joel F. Dubina, Middle District Chief Judge Anne C. Conway, and several other speakers reflected on Judge Black’s stellar career, the words that jumped out at me again and again were gracious, collegial, pioneering, and principled. Really, what more could you want from a jurist? She’s a true example of the very best that a judge can be. I was struck, too, by the tone of the Judge’s thank you remarks, which deferred to the institution of the judiciary rather than her own individual accomplishments.

(It was also fun to meet Judge Adalberto Jordan, making one of his first public appearances as a member of the Court).

The official portrait, painted by artist Harold Davis, Jr., came out lovely (please do visit the artist’ s website to see other portraits he’s been commissioned to paint).  It was so special to see the Judge’s husband and daughter unveil it, and to see it hanging in the lobby of the Courthouse before the reception was over (kudos to court personnel for having the ladder ready to go!). As Judge Dubina noted, Judge Black could take her Senior status and go sit on the beach, but she won’t. And the Court is better off for it.

Be on the lookout for the transcript of the ceremony, which will appear in the Federal Reporter.

9.110(n) Amended to Conform With Statutory Change Judges and iPads
Scroll to top